Since 1971, on Aug. 26, we celebrate and honor the accomplishments and strides women have made with Women’s Equality Day. The Westchester Community Foundation has been supporting women for more than 20 years through its Westchester Fund for Women and Girls (WFWG). In the early 1990s, the gender pay gap was about 71 percent. Women struggled to earn a fair wage and support their families.

In 1992, then WCF Executive Director Pat Larson and the Board of Advisors launched the Westchester Fund for Women and Girls with a goal of raising a $500,000 endowment: $1 for every women and girl in Westchester. Once the initial goal was reached, a new goal of $1,000,000 was established. For the fund’s 10th anniversary, the committee set and raised $2,000,000.

Grants were made to agencies that supported child-care, affordable housing, and job training programs, and that assisted with domestic violence and legal issues. Today, women still aren’t earning what men earn (the gender pay gap is 78 percent). Many women are single moms who struggle to pay the bills and put food on the table. And the issues are the same now as they were then: childcare access, employment, secure housing, and domestic violence at all income levels. And WFWG is still there.

The Westchester Fund for Women and Girls has awarded more than $1.2 million in the county since its launch, and a $2 million in endowment ensures that there is a permanent source of funds for local nonprofits. In addition, the Fund has given mini-grants to the League of Women Voters for the Running and Winning program, which encourages the next generation of girls to enter public service. We believe that strong, secure families are the key to making changes in our communities. The Foundation targets its investment in order to effect changes in people’s lives. 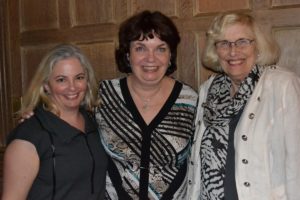