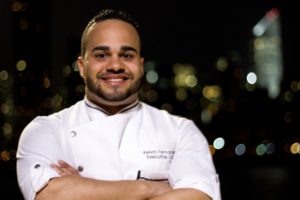 Buzz Creators Inc.’s client, La Marina, proudly announced the appointment of Chef Kelvin Fernandez to the position of Executive Chef for the iconic NYC waterfront restaurant. Chef Fernandez has begun incrementally releasing his new menu items and food photos – more will be introduced over the course of the next few weeks.

The mercurial chef and Harlem native has spent his NYC-focused career shaping his own palette and interpreting global cuisine for diverse local tastes. His journey to becoming a chef, which has led him through some of the top kitchens in the area, began right at home. Fernandez was originally inspired to cook by watching his father, also a chef, prepare family meals. Despite being discouraged by his parents to go into hospitality, he realized early on that he had a natural talent for cooking.

After moving to Queens, Fernandez attended Long Island City High School. During his junior year, the budding chef began taking cooking classes which led him to cooking competitions against other students. At his first competition, he won was a trip to Lyon, France, an experience that inspired him to pursue cooking as a career. He then won a $40,000 scholarship to the Culinary Institute of America, graduating with honors in 2005. The lure of the kitchen proved to be a perfect fit, combining his strong work ethic, attention to detail, creativity and fixation with transforming ingredients into experience.

As his career progressed, Fernandez began to hone his skills and develop diverse dishes, which helped him move through the ranks pretty quickly. Fernandez became one of the youngest executive chefs in New York at the age of 22. He then moved to The Strand Hotel in NYC, where he worked his way up to Executive Chef, a position he had been denied because of his age. It took Fernandez eight months to convince The Strand that he possessed the necessary qualifications to run their culinary programs. Most recently, Fernandez developed the concept for Blend on the Water in Long Island City, where he also served as Executive Chef.

Fernandez’s talents have now earned him a place at La Marina, one of the most talked about new restaurants in Manhattan. Here at La Marina, he will use his arsenal of culinary tools and creativity to create a year-around menu focused on steaks, fresh seafood and seasonal ingredients. Chef Fernandez will also be testing items such as smoked bluefish, pork ribs and house-smoked bacon from the newly built La Marina smokehouse.

La Marina is a full-service restaurant (300 seat dining room & and alfresco seating for more than 250), lounge with nightly DJs (established acts and newcomers), and events space (complete with its own sandy beach and smokehouse!) with more than 75,000 square feet of waterfront dining and entertainment. Get ready to kick off your shoes, order a frozen cocktail, and sink your feet in the sand while enjoying the cool breeze off the Hudson River. Situated along the edge of the Hudson River in upper Manhattan, La Marina is a hidden getaway in the bustling city, offering a chance to escape without ever leaving the City! Great music, well prepared cocktails and amazing food combine to create a luxurious urban island paradise!

La Marina is a great option for a night out or romantic dinner and for hosting both business and social events. La Marina can host any type of event, including company celebrations, off-site team-building and meetings as well as birthday parties, bridal/baby showers, Bar Mitzvah parties, rehearsal dinners, etc. La Marina offers a variety of indoor and outdoor events spaces for parties ranging from 50 people to 3,000 people. Here is La Marina’s e-brochure for events — www.lamarinanyc.com/plan-your-event/ebrochure.

La Marina is located on the west side of Manhattan, 1.5 miles north of the George Washington Bridge, off of the Henry Hudson Parkway. Limited valet parking service is available, and garage parking can be reserved in advance (http://www.parkwhiz.com/la-marina-parking/edison-parkfast/). You can also come by boat to La Marina and tie up at our brand new 400 ft. floating dock. For charter vessels and party boats, please contact 212-567-6300 in advance.