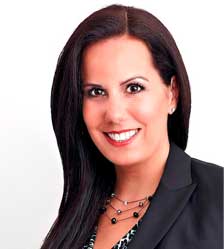 My dream vacation... Hawaii will always have my heart. It’s where I honeymooned and I simply love returning to this tropical paradise!

My favorite thing about working at Buzz Creators... Meeting new people everyday and learning the ins and outs of their business. I’ve always been a curious person.

If I had $1 million dollars to spend... I’d pay off my mortgage and go on some exotic vacations overseas. I’m much more into “experiences” rather than “things” in general.

My hobbies are... cooking, going to my kids’ sporting events, relaxing at a great spa, reading and vacationing!

A natural-born communicator, Christina Rae found her career path early in life after a teacher of hers recommended that she either look into public relations or become a lawyer. Well, she definitely made the right decision! More than 20 years later, Christina is still passionate about her role as a PR professional.

With more than two decades of experience in marketing and communications, Christina is a seasoned and well-respected advisor to her clients. Her expertise includes public relations, reputation management, brand building, thought leadership and audience engagement. She has managed communications programs within a variety of industries including healthcare, food & beverage, hospitality & travel, professional services, real estate, financial services and technology.

Prior to CIT, Christina served as Vice President, Global Communications, at MasterCard Worldwide. During her seven year tenure, she was responsible for developing and driving MasterCard’s communication strategy for its Advanced Payments, Security & Risk and New Markets & Investments divisions. Christina led the communications program for the very successful global rollout of the MasterCard® PayPass™ contactless payment program.

Prior to her role at MasterCard, Christina served as a Senior Account Executive at Brodeur Worldwide, a leading public relations agency. During her three year tenure, Christina developed and managed communications programs for clients including Symbol Technologies, Philips Consumer Electronics, ENTEX Information Services and IBM. In addition, Christina has served in communications roles at Prodigy Incorporated, Pepsi-Cola, and White Plains Hospital Center.


Christina received a Bachelor of Arts degree in Communications from Pace University. She is a strong believer in “paying it forward” and volunteers for numerous community organizations, including American Heart Association, Leukemia & Lymphoma Society, The Ty Louis Campbell Foundation, The Alliance for Safe Kids, her local PTA, and Pace University’s alumni mentor program. Christina lives by the mantra — work hard, play hard. Outside of work, her interests include reliving life through the eyes of her three beautiful children, traveling, photography and cooking. She’s also never met a spa that she didn’t like!

Back to About Us